Badge of Vows 60 is a quest item obtained during the From A Different Sky quest of the same number. The badge is the remnant of a former Riftstone, collecting it earns a reward of Rift Crystals.

In the original Dragon's Dogma, Badge of Vows 60 is obtained as part of the From A Different Sky - Part 6 DLC quest pack, in Dark Arisen, the quest is included in the base game.

Found in The Bluemoon Tower.

The badge is found on an archway pillar on the entrance floor of The Bluemoon Tower - entering through the main gate, cross the bridge, pass the griffin statues, and under the arch to the broken stairwell leading up the tower. Progress to the landing where the first set of steps lead up - here typically are two Snow Harpies and a chest, plus either bandits or Skeleton type enemies.

The badge rests halfway up the base of the first stone arch that is passed where Snow Harpies are encountered. To knock it down, generally either a bow or ranged magick is needed. 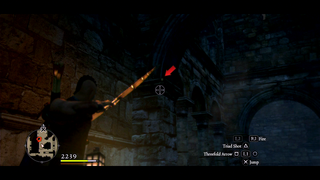 Visual of location
Retrieved from "https://dragonsdogma.fandom.com/wiki/Badge_of_Vows_60?oldid=300115"
Community content is available under CC-BY-SA unless otherwise noted.