Badge of Vows 57 is a Badge of Vows medal obtained during the From A Different Sky quest of the same number. The badge is the remnant of a former Riftstone, collecting it earns a reward of Rift Crystals.

In the original Dragon's Dogma, Badge of Vows 57 is obtained as part of the From A Different Sky - Part 6 DLC quest pack, in Dark Arisen, the quest is included in the base game.

Found in the Emperor's Pillar room within Dripstone Cave.

Travel to Dripstone Cave and to the Emperor's Pillar within the cave system.

The badge can be found in a small hole just above the ledge used to drop into the room when entering the cave from the Cassardis well. The badge can be difficult to spot during the day as the hole is filled with light until night sets in.

Any ranged attack or spell can be used to loosen the badge from its high location - once released the badge will fall to the ground allowing it to be picked up.

A standard bow shot such as loose is enough to release the badge; skills like Comet Shot or Lyncean Sight can make it easier to pinpoint the badge at the bottom right corner of the hole. Targeted spells such as  Ingle or Levin will release it, as will broader spells such as High Brontide or Maelstrom. Warriors may use the skill Arc of Deliverance on the ledge - the shockwave will dislodge the badge. 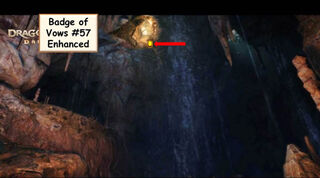 Visual location [day] (The Badge has been enlarged and enhanced to better depict its location. 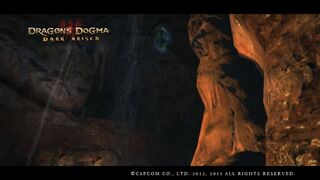 Visual location [at night]
Retrieved from "https://dragonsdogma.fandom.com/wiki/Badge_of_Vows_57?oldid=281623"
Community content is available under CC-BY-SA unless otherwise noted.