Badge of Vows 55 is a Badge of Vows medal obtained during the From A Different Sky quest of the same number. The badge is the remnant of a former Riftstone, collecting it earns a reward of Rift Crystals.

In the original Dragon's Dogma, Badge of Vows 55 is obtained as part of the From A Different Sky - Part 6 DLC quest pack, in Dark Arisen, the quest is included in the base game.

Found in The Watergod's Altar within the Offering Chamber.

The badge is found in Watergod's Altar on one of the pillars in the Offering Chamber.

The badge can be obtained by shooting at it to cause it to drop to the ground; alternatively a single barrel of explosives throw at the badge should also dislodge the badge. Barrel stacking could also be used to reach the badge.

The pillar (and others) can be destroyed, either using powerful attacks such as a warrior strike, multiple explosive barrels, strong spells such as bolide, or by strikes from monsters (such as the resident cyclops or wyrm). 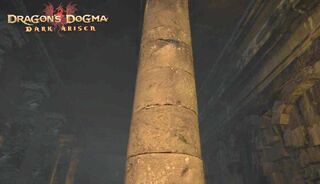 The pillar, with the badge on the third block in view up, near the fourth block up 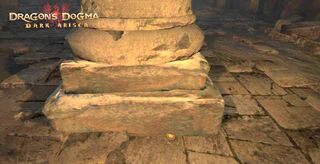 Dislodged badge at the base of the pillar

Retrieved from "https://dragonsdogma.fandom.com/wiki/Badge_of_Vows_55?oldid=281621"
Community content is available under CC-BY-SA unless otherwise noted.