From A Different Sky - Part 4

Badge of Vows 40 is a quest item obtained during the From A Different Sky quest of the same number. The badge is the remnant of a former Riftstone, collecting it earns a reward of Rift Crystals.

In the original Dragon's Dogma, Badge of Vows 40 is obtained as part of the From A Different Sky - Part 4 DLC quest pack, in Dark Arisen, the quest is included in the base game.

Found on the rooftop area of The Greatwall, and is only available during the final battle of the quest Deny Salvation.

The badge may be found on the Greatwall's third floor -this area is only accessible during the end of the quest Deny Salvation.

When the party enters the open upper area on the third floor a battle between Wights summoned by the Elysion ensues - the badge must be obtained afore the battle ends.

The badge itself is located on the keystone of an arch leading further into the keep - shoot the badge with magic or arrows to dislodge it. Once picked up the from a different sky quest is complete, though the wights must be defeated before the party can leave. 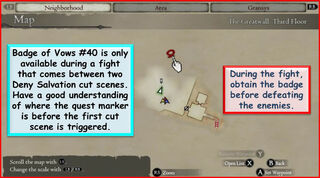 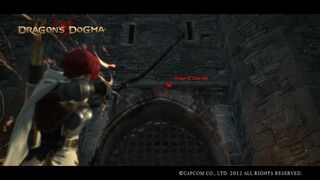 Retrieved from "https://dragonsdogma.fandom.com/wiki/Badge_of_Vows_40?oldid=312845"
Community content is available under CC-BY-SA unless otherwise noted.