From A Different Sky - Part 1

Badge of Vows 4 is a Badge of Vows medal obtained during the From A Different Sky quest of the same number. The badge is the remnant of a former Riftstone, collecting it earns a reward of Rift Crystals.

In the original Dragon's Dogma, Badge of Vows 4 is obtained as part of the From A Different Sky - Part 1 DLC quest pack, in Dark Arisen, the quest is included in the base game.

Found in a cave containing a tomb beneath Chief Adaro's House in Cassardis.

Travel to Chief Adaro's House in Cassardis. At the final flight of stairs leading to the house's door jump across and down to the cave via three ledges - the third leads to the cave. 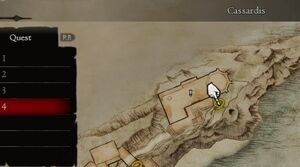 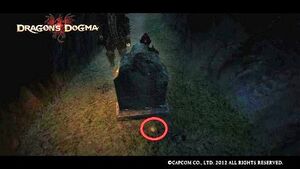 Visual of Location Behind Tombstone 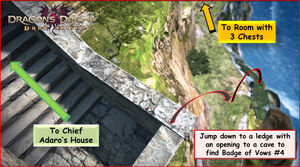 Fig. 1: Leave the paved path and jump down to a ledge with an opening to a cave to find Badge of Vows #4. 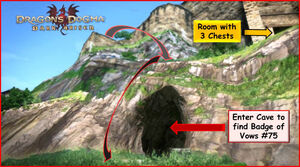 Fig. 2: Enter the cave to find Badge of Vows #4. Note the entrance to the room with the three chests off a higher ledge in the upper right corner of the photo.

Picking up the badge successfully completes the quest. It is relatively safe to jump down to the beach, though be careful of landing in the Brine.

Retrieved from "https://dragonsdogma.fandom.com/wiki/Badge_of_Vows_4?oldid=281614"
Community content is available under CC-BY-SA unless otherwise noted.