From A Different Sky - Part 4

Badge of Vows 38 is a Badge of Vows medal obtained during the From A Different Sky quest of the same number. The badge is the remnant of a former Riftstone, collecting it earns a reward of Rift Crystals.

In the original Dragon's Dogma, Badge of Vows 38 is obtained as part of the From A Different Sky - Part 4 DLC quest pack, in Dark Arisen, the quest is included in the base game.

Found near the Greatwall Encampment in the Barta Crags region of Gransys.

To the right of the main gate from the Greatwall Encampment leading to the The Greatwall, the fencing can be followed to the side of the mountain where the badge is situated. Caution should be used as there are steep drops here. 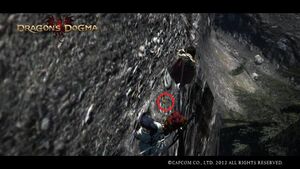