From A Different Sky - Part 3

Badge of Vows 25 is a Badge of Vows medal obtained during the From A Different Sky quest of the same number. The badge is the remnant of a former Riftstone, collecting it earns a reward of Rift Crystals.

In the original Dragon's Dogma, Badge of Vows 25 is obtained as part of the From A Different Sky - Part 3 DLC quest pack, in Dark Arisen, the quest is included in the base game.

Located in The Shadow Fort, on broken planks above the Station Room.

The badge can be difficult to access, if the Arisen lacks Levitate or Double Vault. The badge is located on a broken wooden platform above the Station Room, above a goblin tunnel hole and high quality chest.

This badge can also be obtained using Double Vault. After stepping through the outer door of the station room jump onto the crate on the left and double vault to the beam jutting out of the wall.

Then hop to the beam on the other side of the wall, followed by another double vault to the wooden platform where the badge is.

Take care to jump from the crate before any pawns smash it. Otherwise a running jump with a double vault can be used to get to the middle beam from the platform accessible by a ladder outside the building.

The broken beam sticking out of the middle wall of the Station room can also be accessed using an ice block created with a Frigor spell.

Fighter and Warrior characters can reach the item through the use of stacked barrels. Several barrels will be required.

Alternatively it may be possible to get close to the elevated position of the badge by climbing and then jumping off a creature such as a Cyclops. Lure the creature to a close position first, then climb. 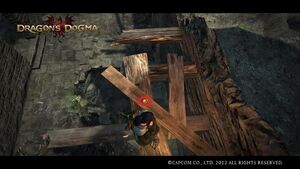 Retrieved from "https://dragonsdogma.fandom.com/wiki/Badge_of_Vows_25?oldid=300107"
Community content is available under CC-BY-SA unless otherwise noted.