From A Different Sky - Part 3

Badge of Vows 24 is a quest item obtained during the From A Different Sky quest of the same number. The badge is the remnant of a former Riftstone, collecting it earns a reward of Rift Crystals.

In the original Dragon's Dogma, Badge of Vows 24 is obtained as part of the From A Different Sky - Part 3 DLC quest pack, in Dark Arisen, the quest is included in the base game.

Found in the Catacombs on the Second Level Underground.

This badge is located at the end of a rock cut tunnel visible from one of the tomb rooms of the area.

To access it go to the natural open caverns within the second level, and follow the passage near the scaffolding that leads back into the tomb rooms.

At the end of the tunnel is a the chest and behind it the badge. 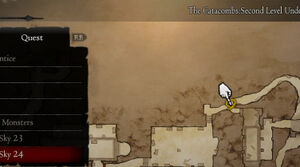 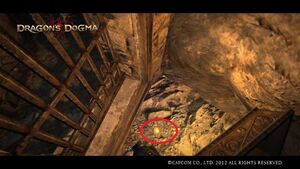 Retrieved from "https://dragonsdogma.fandom.com/wiki/Badge_of_Vows_24?oldid=281583"
Community content is available under CC-BY-SA unless otherwise noted.