From A Different Sky - Part 2

Badge of Vows 20 is a quest item obtained during the From A Different Sky quest of the same number. The badge is the remnant of a former Riftstone, collecting it earns a reward of Rift Crystals.

In the original Dragon's Dogma, Badge of Vows 20 is obtained as part of the From A Different Sky - Part 2 DLC quest pack, in Dark Arisen, the quest is included in the base game.

This badge may be found on a pillar on the Fifth Level Underground of The Everfall.

From the top of the stairs while facing down from the Fourth Level to the Fifth Level Underground, jump to a structure of rocks on the left. Use Double Vault or Levitate to reach the Pillar.  This jump is actually makeable without ether skill, position at the closest highest point on the nearby rock and aim for the corner of the pillar. 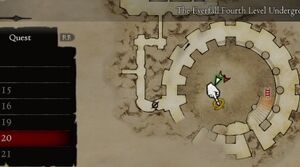 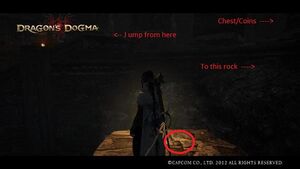 Retrieved from "https://dragonsdogma.fandom.com/wiki/Badge_of_Vows_20?oldid=281575"
Community content is available under CC-BY-SA unless otherwise noted.