Start a Wiki
watch 01:53
What are Assassins?
Do you like this video? 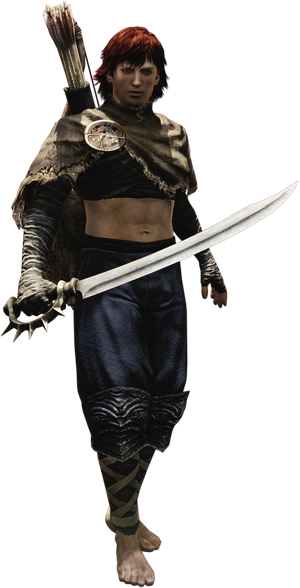 The Assassin is one of three Hybrid vocations in Dragon's Dogma. Hybrid vocations are exclusive to the Arisen, and cannot be learned by Pawns. It costs 1,500 Discipline Points to initially unlock this vocation.

"An expert at covert attacks aided by mastery of a variety of weapons."

The Assassin is a versatile vocation in Dragon's Dogma, and one suited to adventuring alone, if wished. They can wield Daggers, or Swords as their primary weapons; combined with either a Shortbow or Shield as a secondary; in any of the four possible vocations. These assets can be changed on the fly, to suit current combative needs.

The Assassin uses a blend of the skills of Strider and Fighter together with special skills and augments of its own. An Assassin's armor requirements are similar to that of the Strider - high mobility with fair defence - though Assassins concentrate on killing with minimal chances for the foe to respond, so their sets may be less defensive. Specific Assassin armors usually show dark resistance, as well as being dark in color themselves.

An Assassin has very high increases in Strength and Stamina as it gains experience, to the detriment of Defense, and very little Magick ability at all. Its specialised skills focus on sneak attacks, sniping, counters and parrys, and traps, and its augments are focused towards adventuring alone and at night.

Assassin's also have better mobility than other vocations when on the ground - the effect is similar to being one Encumbrance rank lower, but not quite as strong.

Skills in bold are unique to the Assassin.
Skills in italics can only be obtained via Skill Rings and Bands found in Dark Arisen.

The Equipment of the Assassin shown at the top of the page:

Retrieved from "https://dragonsdogma.fandom.com/wiki/Assassin?oldid=309171"
Community content is available under CC-BY-SA unless otherwise noted.