Partakes in Notice Board Quests

Arsmith is an NPC in Dragon's Dogma.

Arsmith owns the tavern Arsmith's Alehouse, where many side-quests can be triggered from the billboard. After gathering the required items, the player must return them to Arsmith to complete the quest.

Most of the items he requires are items usually given as rewards from other quests. For example, Maul's Badge of Amity is a required item for one of Arsmith's quests. 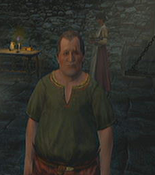 Retrieved from "https://dragonsdogma.fandom.com/wiki/Arsmith?oldid=314004"
Community content is available under CC-BY-SA unless otherwise noted.