watch 01:45
Game Recap: Dragon's Dogma: Arousing Suspicion
Do you like this video?

Speak to Aelinore in the Duchess' Gardens during Come to Court.

Duchess In Distress
(If Aelinore is saved)

Sidequest
Arousing Suspicion is a quest available in Dragon's Dogma.

"Mirabelle brings word that Lady Aelinore desires a secret meeting. Even as Arisen, dare you grant such a request?"

Arrange a clandestine meeting with the Duchess Aelinore.

This quest is easily missed. To be eligible for it, the Arisen must have first spoken to Aelinore after meeting the Duke during Come to Court, but before the cutscene with Aldous at the gate on the way out. With the prerequisite achieved, the player may find Mirabelle immediately after Come to Court to start this quest, most likely in the entry hall during the day. If she is not there, it may be necessary to have left and re-entered the map.

Mirabelle requests you meet her in the Duchess' gardens after night - accept the request and rendezvous with her after sunset.

Mirabelle will be in the Duchess' Gardens to the northwest of the keep. She will then inform the Arisen that the Duchess wants to meet the Arisen in secret in the Duchess's Bedchambers in the northeastern tower, again at night. Accept the request to continue the quest.

Take caution as being spotted by the guards at night will result in being thrown into the dungeons.

To get to Aelinore's chambers, head through the audience chamber, up the stairs to the left, and through a small door to a side room. From there head upwards until the causeway bridge linking the keep to the tower is reached - Aelinore's chambers are in the tower at the other end of the bridge.

If entering the castle at night, any contact with the palace guards will result in being thrown into prison. Guards patrol both the gardens and main chambers of the castle - there are numerous routes into the castle - the servants rooms can be used to hide in whilst guards pass as they never enter. An alternative and simpler method is to enter the castle at day, take the stairs to the tower, and then hide in the upper area of the keep accessed by a ladder until night falls.

Enter the tower at night to meet with the Duchess. A romantic scene begins but is interrupted by the Duke and his jester Feste and the Arisen is forced to hide.

Next the Duke, maddened by the moon, and his own personal loss loses his grip on reality and assaults Aelinore, strangling her. The Arisen then has two choices:

Only the first will save Aelinore, the second condemns her to death at the Duke's hands. Regardless of the choice, the Arisen will eventually be discovered and thrown into the dungeons.

After being found and captured the Arisen will be placed in the dungeons and must escape.

If Aelinore was saved she will visit the Arisen there and provide two Skeleton Keys with which the Arisen can make an escape. Otherwise the Arisen must escape without aid.

The southwest cell contains a broken wall and entrance to sewers, and thence to the Slums of Gran Soren. On exit, the quest is complete.

"Worry not after His Grace, Arisen. He's not set foot within milady's chambers since the wedding night. Yet his guard remains ever watchful Take care to avoid discovery."

"My warrior has come for me!  ...You must think me a shameless harlot. Would that words could prove my love is pure!"

"Your Grace... Edmun, I... This isn't... This wicked fool mistook a trifling kindness that I once paid for something more... He stole into my room. I was terrified! This commoner must be made to learn, sire! Give him a taste of the lash and a stay in the dungeon!"

"What have I done? I cannot ask forgiveness for this betrayal... But I was certain the duke would cut me down where I stood had I not spoken so! "

"You must run. The duke is half mad and fearsome wroth. I shall think of some way to assuage him."

"Well now, what have we here? Friend of the duchess, sneaking off to her chambers for a cup'a tea? Must be a fine tea, what to come all this way in the dead of night. Or perhaps you seek refreshment of a different sort? Like a turn in the sheets with His Grace's own wife!"

"Damn. You're tougher than you seem... Perhaps there's aught to this Arisen business after all."

"Milady is mistaken! I would never violate His Grace's privacy while he violates milady's privates."

"A request from the duchess... I do hope acceding to it is a good idea..."

"Master, you're hurt! How did this happen!?" 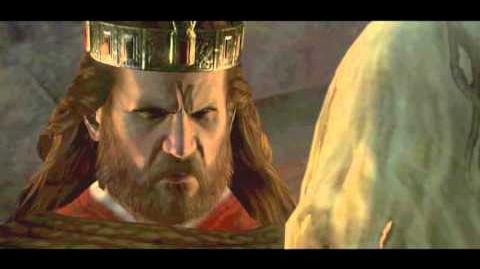 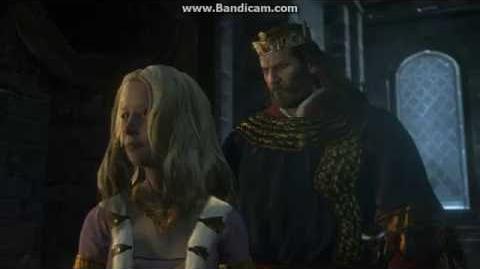 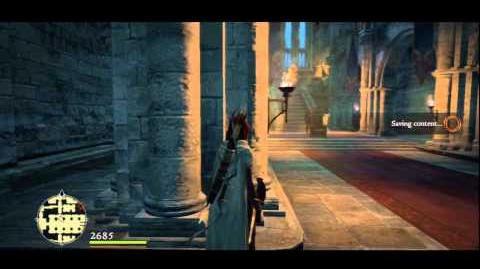