View source
watch 01:17
Who is Arisen?
Do you like this video?
Play Sound 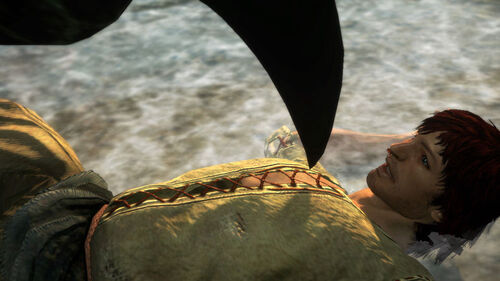 Arisens are those that have been chosen, or chose themselves, to challenge the Dragon. In the world of Dragon's Dogma, an Arisen's journey always begins with them losing their heart to a great dragon, beginning their quest to regain it by defeating the dragon.

In the story told in Dragon's Dogma, the Arisen is the main protagonsist (and playable character) - they start life with a humble background in the fishing village of Cassardis. Their journey begins when The Dragon attacks the village, and they take up arms against it.

The Dragon and the Arisen are connected through the scar on his or her chest and through it, the Dragon can communicate with the Arisen. An Arisen does not age and has immunity to sickness, though they can still die in battle. The vitality of the Arisen is linked to their heart being kept by The Dragon; so long as The Dragon lives, the Arisen cannot die, save for in battle. Subsequently, when the Dragon dies, all Arisen who have not reclaimed their heart will age the amount of time that their heart was kept. This means age or death will eventually catch up to them; however, as their lives depend on how long the Dragon lives, some Arisen have been known to live for centuries.

Over the course of the game, the Arisen will become an unimaginable powerhouse, gaining superhuman abilities. They gain mastery over various weapons and can kill armies of men and monsters. Their magical prowess can be just as high - gaining the ability to summon earthquakes, tornadoes, and meteors, and able to kill huge creatures with a single spell. Eventually resistant to all but the strongest magicks and physical attacks, not even the Archmage Salomet can stand against them. Nevertheless, Arisen are bound to the will of causality, as all creatures are; indeed, the thread of fate inextricably links the Arisen to the endless chain and the cycle of eternity. No matter their personal desires, the Arisen is the axis upon which the world turns, and their will to survive is the lifeblood of existence itself.

Once the Arisen's skills are developed, few creatures pose a threat to them, save perhaps those found on the mysterious Bitterblack Isle.

Every Arisen has at their command a loyal otherworldly being known as their Main Pawn, and can enlist and journey with any other Pawns that they encounter.

This timeline is based on logical assumptions and the information provided in the game.

The Dragonforged and the Duke were Arisen after Savan; the Dragonforged is of a much greater age than the Duke - evidenced by him turning to dust as the aging process was restarted on the defeat of the Dragon. Their own testimonies place their Dragon attacks at 1000 and 50 years ago respectively.

Sofiah's position in the timeline is complex. Through the Bestowal of Spirit her pawn Selene has come to resemble her, but Selene is young and Sofiah old - it may be that this difference is due to Sofiah aging like a normal person after gaining back her heart on defeat of her Dragon. Another possibility is that Sofiah was an aged Arisen, who chose a young looking pawn who came to resemble her in her as she was in her youth (since pawns do no age). Alternatively, it may be that Sofiah simply died in battle during her quest.

Several histories for Sofiah are possible:

The idea that Sofiah died in ancient times is seemingly contradicted by Gransys inhabitants who have folk memories of an old "witch" living in the forest. In conversations with The Fool, he says that there were at least two or three Arisens before the Newly Arisen.

It is also thought that Grigori, the Dragon, was once an Arisen. As a human, he defeated a great dragon of his own and later fought against the Seneschal, but failed to defeat him. Because of his defeat, he was transformed into a dragon and set forth to find a new Arisen. In the ending "Servitude" the Arisen receives this fate if they fail to defeat the Seneschal in combat; in Dark Arisen the Arisen Grette also has this fate.

Arisen who fall before facing the Seneschal are thought to be transformed into lesser Dragons such as Drakes, Wyrms, or Wyverns. Some Dragons appear to have retained memories of their former lives.