Archydra is an Enemy in Dragon's Dogma.

The Archydra is a stronger version of the Hydra, with higher attack strength and defenses. Its scales are white rather than black.

It can be encountered in the Chamber of Hesitation in Post-Dragon Everfall, as well as randomly in the Post-Daimon Rotunda of Dread.

The Archydra's behavior, skills and abilities mirror the Hydra: it can regenerate heads, is vulnerable to fire, and can swallow opponents. The Pawn's Bestiary knowledge for both sub-species is shared.

The Archydra should also have its wounds set on fire which delays head regeneration. It is resistant to all elements, but Dark and Fire less so. Its only real weakness is to slashing weapons. Each 'snake' should be struck as near as possible to the head or neck, where their resistance is weakest. The unique Hydra Husk longbow is as effective here as it is against a common Hydra.

Additionally, a fully decapitated Archydra will regenerate two full health bars whilst the heads grow back, double that of the Hydra. 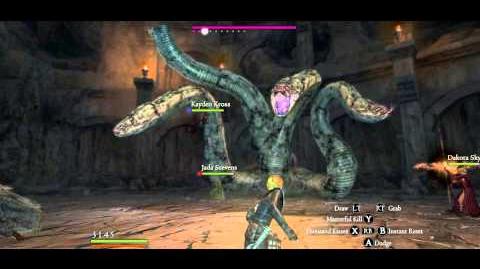 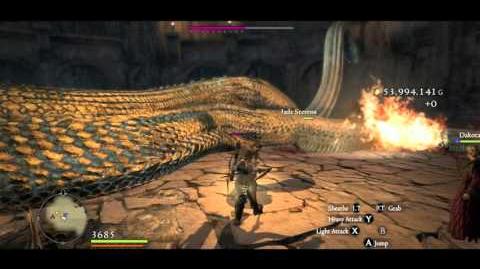 Strider vs Archydra in the Chamber of Hesitation-0
A Strider demonstrating Downpour Volley's effectiveness against Archydras with a Dragon's Ire bow. Hard mode demonstration with no armor, buffs, curatives or Wakestones used.

For full information, refer to the Bestiary page and the corresponding section on the Hydra page.

In addition to witnessing these techniques, it is necessary for Pawns to participate in killing 7 Archydras either with their own Arisen or while travelling with others.

Archydra in the Chamber of Hesitation
Add a photo to this gallery
Retrieved from "https://dragonsdogma.fandom.com/wiki/Archydra?oldid=316592"
Community content is available under CC-BY-SA unless otherwise noted.