Start a Wiki
watch 01:29
What is A Warm Welcome?
Do you like this video?

A Warm Welcome is a quest available in Dragon's Dogma.

"As the dragon breathed its last, the sky dimmed and the earth shook. Monsters grew in might. Are the duke and his capital safe?"

The Dragon is slain, but in his death he brings about a cataclysm in Gran Soren, destroying much of the city.

Return to Gran Soren to see what has occurred.

This quest begins after defeating the Dragon in The Final Battle. The Arisen is returned to their house in Cassardis and is required to head back to Gran Soren.

Following the defeat of The Dragon, the world is a much darker and more dangerous place (known as "Post-Game"). A Gorechimera lurks on the Unusual Beach; Seabreeze Trail and the Manamia Trail are now infested with Grimgoblins, Hellhounds, Giant Undead, and Succubi.

The path through the Moonsbit Pass is equally affected, with the main path now patrolled by Geo Saurians and a Golem. Skeleton Sorcerers, Skeleton Lords and other undead foes now rise from the ground in the area at night. The alternative route is blocked by Grimgoblins and an Ogre.

Beyond the pass, the final leg to Gran Soren through the Estan Plains, is now circled by more flying beasts like Harpies, and a Wyvern may waylay the party on the route to the southern gate. The path through the ruined walls is also greatly endangered, with Gargoyles and Hellhounds to be found.

Inside Gran Soren, the Arisen finds much of the city destroyed. Where the larger part of Gran Soren used to be, is now a gaping hole. The Venery, the Slums and the Aqueduct are all gone, and the larger part of the Urban Quarter has disappeared as well. Guards will accost the Arisen and state their worry on the situation in the Duke's Demesne.

Go to the castle, go upstairs to the Duke's Solar to speak with him.

The Duke makes it plain what he thinks he knows the Arisen has done, he blames them for his present state, attempts to battle, and calls for the guards, accusing the Arisen of witchcraft, and being in league with the Dragon. After escaping from the Keep, the loyal guards pursue.

Surrounded by Gran Soren Guards, escape the castle grounds towards the Noble Quarter. Once outside the castle, Ser Maximilian and more guards will assail the party and give chase.

Escape with the pawns to the Urban Quarter. Once at the former location of Fountain Square, near to the gaping hole, a cutscene will play to continue the story.

.. The Arisen enters the Everfall ...

The Arisen is left falling continuously through a ruptured Everfall. Attempt to land on one of the side platforms to continue - pressing [grab] whilst near and above a platform will result in a soft landing.

Quince is waiting on the first floor of the Everfall and speaks to the Arisen to begin the quest Fathom Deep. Landing on any other ledge will first take the party to the Chamber of Confusion where an Evil Eye awaits.

Back above ground in Gran Soren, the guards will have discontinued their search for the Arisen, but they will continue the chase upon entering the Noble Quarter. 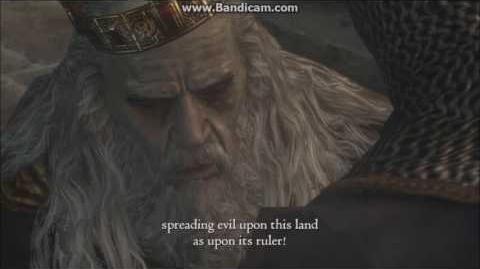 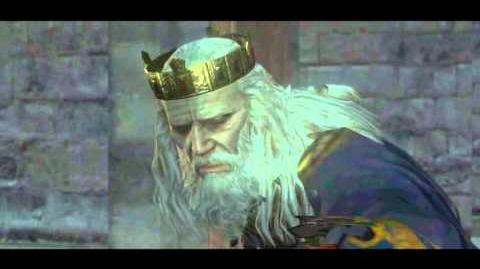 "Well met, Arisen. We've been awaiting your return. Waste no time on us, ser -- the duke awaits. I fear for the others in the castle, besides.Though 'tis small mercy to be spared only to face this world... Perhaps we'll all be wishing the earth devoured us ere long."

"Arisen... I am glad to see you well. We're yet uncertain of the cause of all that's happened. For now, finding those what survived comes first. I worry for those in the castle, but alas, I cannot leave my post to see what's become of them."

"Ah, Arisen. I ask that you resent yourself before the duke with all haste. His Grace has a matter of grave importance to discuss... What meaning can this hold...?"

"You! You met with the dragon! And don't think for a minute I don't know what you did then. I... I of all men! No human hands could fell that beast. No... You took the dragon's bargain! You conspired with it to wither me and usurp my seat as duke! But you'll not be quit of me so easily!"
"You! Had you ne'er come, I would yet rule this land..."
"I knew neither age nor the sting of death while the dragon yet drew breath..."
"But you, you covetous wretch! You wanted eternal life for your own, and my title what's more!"
"You took the dragon's bargain! You sold your love to death in exchange for glory!"
"The beast promissed you my seat if you slew me, is that it? Eh!?
"Well, you'll not have it. You'll ne'er have it!"
"I'll not give it up. Not to you! I'll rot afore I see Gransys bow to you!"

"I knew you for a villain! I've suffered your avarice and deceptions out of deference to the office of Arisen... But you have shown your true color, ser! You are a traitor to the duke and to us all!"

"Put this rogue to chains, men! His Grace commands the Arisen's capture, dead or alive!"

Retrieved from "https://dragonsdogma.fandom.com/wiki/A_Warm_Welcome?oldid=302878"
Community content is available under CC-BY-SA unless otherwise noted.