Call of the Arisen

Main Quest
A Rude Awakening is a quest available in Dragon's Dogma.

"Your night among the Enlistment Corps was restful. Not so the morning: The Corps' lack of vigilance has invited a hideous visitor."

Accept Mercedes offer of a bed, but beware what the morning will bring.

To begin, speak with Mercedes at the Encampment and accept the offer to rest. Not soon after resting, a cutscene will trigger. The Arisen will wake to find The Encampment under attack by a giant Hydra. After the cutscene, attack the Hydra to drive it away.

One may strike the Hydra anywhere with any available attack, but the Hydra's weak spots are its heads. Either climb one of its heads and attack it from there, or use ranged attacks shoot to at the heads with a bow or with magic spells.

The Hydra will immediately be defeated if one of the heads is cut off. Oddly, this can occur without directly attacking any of the heads. Simply inflicting enough damage will end the battle.

If the battle drags on for too long, a cutscene will ensue where Mercedes throws an Explosive Barrel to the player to throw at the Hydra. The Hydra will swallow the barrel, and striking the barrel in its neck will instantly decapitate it.

Once the Hydra is defeated it will retreat. A cutscene will trigger where the Enlistment Corps and Mercedes congratulate the Arisen on their victory. This will unlock the Achievement Getting a Head.

Mercedes will state that it is wise to offer the Hydra's head to the Duke and asks the Arisen to travel with her to Gran Soren.

This will start the quest Off With Its Head, which is required to allow further passage through The Mountain Waycastle. 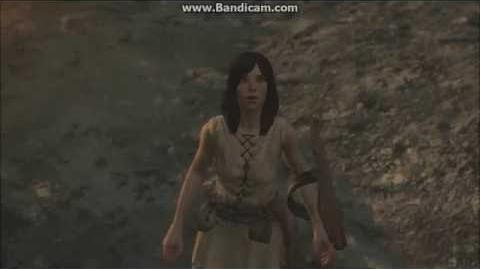 Dragon's Dogma Dark Arisen A Rude Awankening
Strength in Numbers and A Rude Awakening walkthrough
Add a photo to this gallery
Retrieved from "https://dragonsdogma.fandom.com/wiki/A_Rude_Awakening?oldid=280187"
Community content is available under CC-BY-SA unless otherwise noted.